Imagine a startup pitching on a Monday morning at our VC firm’s partner meeting (for some reason, all VC firms have partner meetings on Monday mornings). Their big idea is an amazing new dogfood. They talk at length about a proprietary synthetic ingredient, how the processing plant is a green facility and that the packaging is state of the art. They even mention their product’s great mouthfeel.

Meanwhile, we (the VCs) just want to know one thing: will the dogs eat the dogfood? This was a popular VC catch phrase a decade ago. It’s outdated now, but the metaphor is still vividly effective: a bunch of humans sitting around a boardroom discussing whether dogs are going to like something. This happens all the time: a bunch of _{fill in the blank}__ sitting around a boardroom discussing how _{fill in the blank}__will behave.

Before the founders say another word, the VCs want to see a video of a big group of dogs running away from Purina toward this new dogfood.  The VCs are looking for validation that the theory being asserted about a value proposition has some basis in reality. It sounds good, but what proof do we have that this new product really better/faster/cheaper?

At this point, we are looking for evidence, not reasoning. Plenty of logical ideas turn out to be wrong. The world is too complex for us to be confident with a purely logical approach. Customer behavior is almost impossible to predict with logic alone. We need proof that our value proposition has merit. We need empirical data.

Let me emphasize the word empirical, which means, “based on, concerned with, or verifiable by observation or experience rather than theory or pure logic.” (Source: Dicionary.com) Just as VCs have a simple phrase for the concept of a differentiated superior solution (better/faster/cheaper), they also have a word for empirical evidence that validates the value proposition: traction.

The music industry used to call this buzz. They wanted to sign bands that already had a buzz. I had a wall of rejection letters from major labels. None of them said anything disparaging about our music (i.e., our value prop). Most rejection letters encouraged us to go out and create some buzz. Years later, I better understand what they were saying, just as VCs say, “Go out there and get some empirical evidence that your music/product could take off. If you can show us that people will like what you are doing, we can take you to the next level.”

From the Market Size chapter, this may sound a little bit familiar. Nail the niche, then go big.

There used to be a prevailing mythology that A&R guys sat up in ivory towers and cherry picked great talent, plucked from obscurity and thrust into the limelight. “She was discovered in a coffee shop!” The myth has some basis in reality but is still steeped in plenty of mythology. Yes, it has happened. But no, it doesn’t usually go like that. The normal process includes years of “paying dues” while trying to create buzz/traction, i.e., iterating and validating the value proposition.

What is much more common in the myth above is the move from obscurity to the limelight. That rings true, as even a band with tons of buzz is relatively unknown. They may have a great following in a geographic region or within a certain circle. Major record labels know how to take that limited success (relative obscurity) and go big with it (limelight). There is still significant risk in making that transition, but it is a far cry from the “discovered randomly while walking down the street” myth.

Same with VCs and startups. Even with significant traction, startups are largely unknown to bigger markets, and often it requires an influx of venture capital to break through to the next level. But first a startup needs empirical evidence that it is ready to go to the next level.There is an exception to this rule: serial entrepreneurs, which we’ll discuss in the Founder Fit chapter. If the founding team  has previous successful exits, VCs are often willing to take a leap of faith on traction.

For everyone else, we want empirical evidence, which can come in many forms. Below is an upside-down pyramid that represents, in priority order, some of the more common types of validation venture capitalists are looking for. 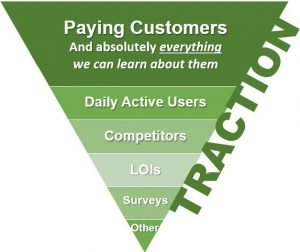 It should be noted that nearly every one of the data points on the pyramid can be represented with numbers. Once again, the numbers will only tell part of the story. We’ll want numerous sources as we weave a narrative about traction. For example, note the “everything we can learn about them” under Paying Customers. Sales figures are important, but the story behind them is equally relevant. Once again, we have a story about numbers.

"This book is always on top of my recommendations for our new hired analysts."

See the Paperback on Amazon

Available here and on Amazon
Reviews

Email [email protected] for more information about how to incorporate VC Strategy into your curriculum. Syllabus and lecture PPTs available.