This aspect of the VC’s job, helping startups grow, is perhaps least appreciated and yet most important. Most VCs I’ve worked with consider themselves company builders, not simply investors. We don’t just create a portfolio and kick up our heels. For many, this is the favorite part of the job, rolling up our sleeves to help startups succeed.

A startup is a unique type of investment going through a remarkable metamorphosis. The months following a venture capital investment are tumultuous for a startup and everyone who works there. Hopefully, it is a constructive tumult, a controlled mayhem, a chaotic but value-creating process.

There are many parallels here again with the music business. Our early startup is like a talented young band. Handing them $1M without any supervision is not a recipe for success. They need the guidance of industry pros who have been there, done that.

Record labels don’t create a roster and walk away from it. They must work the roster. True, they need to attract top talent into the roster, but it is what they do with that talent that separates the top labels (and VC firms).

This flies in the face of the mythology of the discovered artist, who is often sitting innocently in a coffee shop when a talent agent stumbles by. In reality, thousands of artists are “discovered” and never become famous. They get cast in a movie or sent into a recording studio, and magic does not ensure. They fall flat. Happens all the time. When I was pursuing a record deal, the industry was rife with stories about bands with record deals doing nothing. Went into the studio. Cut a record. Went nowhere.

When “discovered talent” does eventually become famous, the myth is that the success was pre-ordained and obvious, just sitting there in the coffee shop! But it was no more pre-determined for the hit than it was for the talented flops. What is much more likely to determine who becomes a hit is work ethic, often a superhuman work ethic. How many “overnight successes” have spent years and years honing their craft?

Record labels and VC firms have entire bullpens full of potential. They constantly work the bullpen, keeping an eye on everyone’s performance, looking for clues, any little hint that could indicate who might be the next breakout performer.

Back in the day, when a new band started getting some regional radio airplay, the label would pour resources toward making a bigger success out of that small win. All of a sudden, that band would be booked on talk shows, the song would be placed in movies and promoters around the country would be hired to advocate for more radio play. A life-size full-color display would be set up at, I’m going to say it, record stores! Display ads would appear in, wait for it, magazines! The band would go on tour as the opening act for a big national band. It is no accident that when a song is a hit, you here it everywhere.

All these things are very expensive. Record labels cannot commit these resources to every act on the roster. They have to work the bullpen and make tough decisions about the next act that will get the benefit of the machine that is a major record label. You and I cannot call Steven Spielberg and ask him to put our hot new band in his next movie. David Geffen can.

I would argue that the true core competency of venture capitalists is the craft of working the portfolio, choosing when to pour on resources and when to withhold. It is the competency of grooming and preparing portfolio companies so that they may be in the position, if they work their asses off, to become unicorns.

Early stage investments are called seed funding for good reason. VCs plant a lot of seeds to see which ones will flourish. The seedlings that sprout get a whole lot of attention: meetings with potential strategic partners, leads for big sales calls, more funding… The process is more like unicorn raising than hunting.

Just as record labels make stars out of raw talent, VCs know how to make unicorns out of startups. Nobody knows more about what it is like to grow a venture from 3 to 300 employees than VCs, who have done it time and time again. Not many humans have experienced the roller coaster ride of growing startups.

Through this process, VCs and record labels share a moral hazard that individuals may not want to emulate. The bullpen model requires that some of the talent in the bullpen will inevitably be neglected. This should be the result of underperformance, but it is often a product of circumstance.

What it almost never is…an easy decision. VCs tell me that these are the hardest decisions: deciding how to divide time and resources amongst portfolio companies; when to limit the time devoted to an underperforming startup; whether a startup even is underperforming or might take off with a little more help. The fading potential starlet, discovered in the coffee shop, has been cast in a few minor roles that never took off but still has the potential to be a big star if only we could figure out the right role for her!

Recall from our definition of venture capital that one of the differentiators is that we actively participate in our investments. We are not simply picking stocks. This can go well beyond simply serving on the board of directors.

After we make an investment, we often roll up our sleeves to help our startups. Our expertise and vast networks are invaluable for connecting startups with potential partners and customers. Just as a record label can place a song in a big movie or put a new band on tour opening for a bigger act, VCs can make significant connections for startups.

The same networks that we utilize in fundraising and due diligence are re-employed toward helping startups in the portfolio.

We have relationships with decision-makers at big companies who have partnered with, been customers of, or perhaps even acquired other startups in our portfolio. These decision-makers will take our calls and meet with our people, knowing that we’re putting our credibility on the line.

Compare that to the responses unfunded startups get while cold calling. The same is true across our network. Other VCs, our LPs, serial entrepreneurs…their networks are a part of our network. We stake our reputations by reaching out to our colleagues when we have something exciting to share. We also make ourselves available to them when they have something exciting for the same reasons.

The more we crate value in the network, the more highly we are regarded and the more quickly calls are answered, favors are granted and, most importantly, we get included on a hot deal that is otherwise impossible to get in on.

On the previous page, I asserted that working the bullpen is a VC core competency. Let me revise that statement to include working the entire network: the bullpen, the bench, the coaching staff, the refs, the sky boxes. Our competency is creating value in this complicated ecosystem.

Because we create value for our portfolio companies beyond supplying cash, venture capital is considered a service business. We are, in effect, in service to our startups. VC firms differentiate based on how we service our portfolios. Some firms are famously deeply involved, perhaps to a fault. Others are more laid back, preferring to let the firm’s reputation speak for itself (and open doors for anyone associated with it).

Some firms go so far as to bring on support staff to do work on behalf of all their portfolio companies, helping them handle challenges common to all startups. Hiring new people, for example, is part and parcel with growth. Some VC firms have talent coordinators to leverage the VC firm’s network and help portfolio companies with recruitment. PR is another need shared by all startups. Many firms have PR staff to help promote the entire portfolio.

True, VCs are often active investors creating value beyond the dollars invested. However, VCs’ main tool for growing companies is capital. The Series A was just the beginning. If a startup gains traction, much more capital will be needed to reach unicorn-like growth levels.

As we’ve discussed, VCs are planning on several rounds of investing before exit. The first institutional round, when VCs enter the picture, is the Series A, and the plan is to have one or more follow-on rounds, called Series B, Series C, etc., on the way to a successful (big) exit. 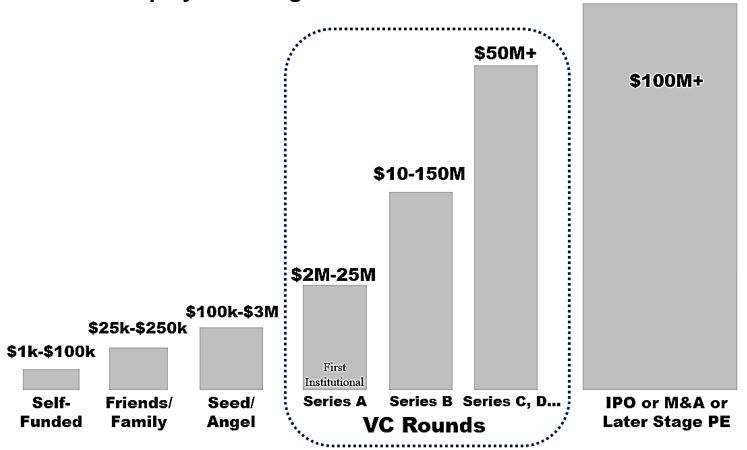